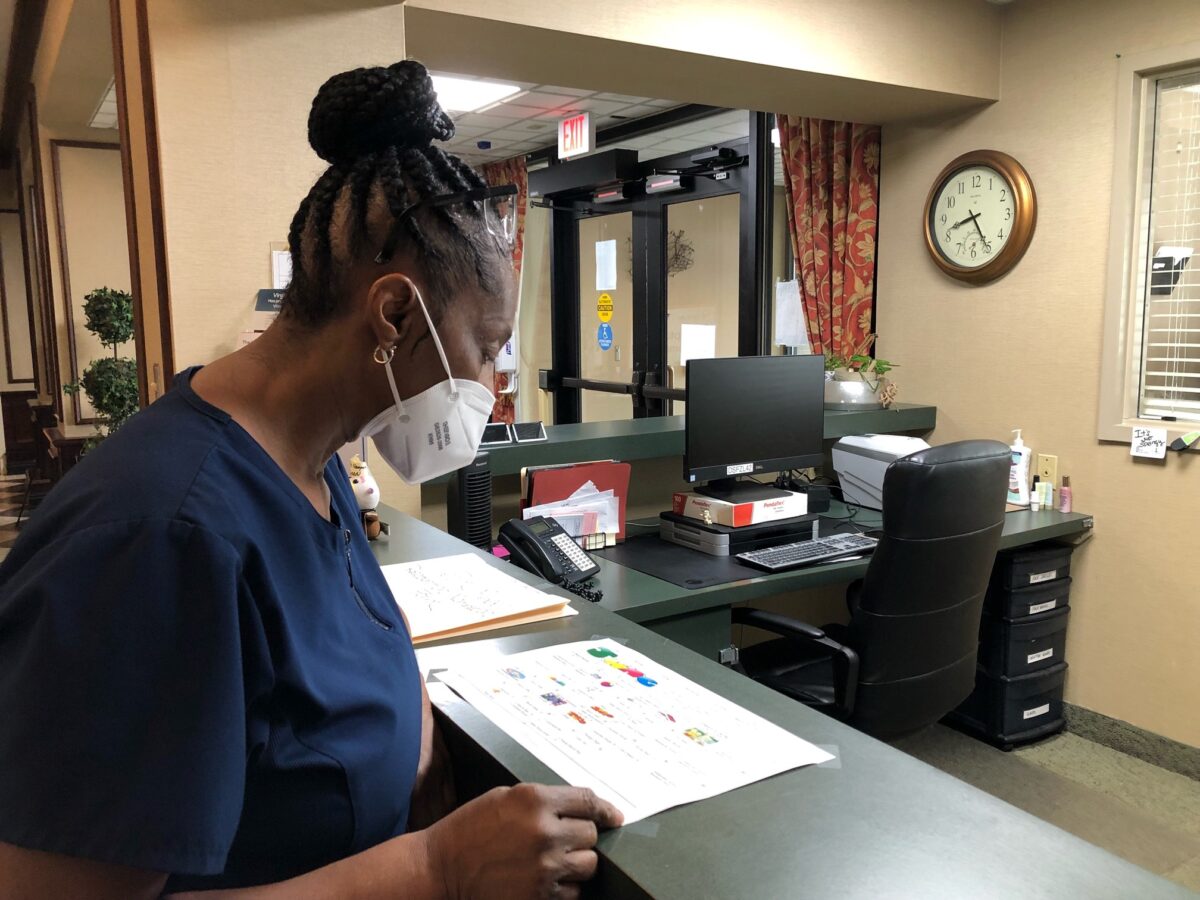 It is National Nursing Assistants Week June 16-22, 2022, and Career Nursing Assistants Day on June 16. Virginia Health Services celebrates its nursing assistants and CNAs (certified nurse aides) for the dedicated care they provide to our Residents at our independent living and assisted living communities and nursing and rehabilitation centers, and the individuals we serve with VHS Home Health Care and VHS Hospice.

We are thankful for their guidance, expertise, patience and advocacy. VHS is committed to investing in its Team Members from the start, offering an earn-as-you-learn apprenticeship program that provides classroom and hands-on experience to Care Assistants. Once graduated to Nurse Aide, the program also covers the cost of the certification exam.

“They are essential to long-term care,” says VHS education instructor Nora Gillespie of nursing assistants. “They are the eyes and ears for the nurses. They spend the most time with the Residents.”

CNAs have been on the frontlines since World War I, when certified nurses’ aides with the American Red Cross worked alongside Army nurses to treat wounded soldiers.

Virginia Health Services has several Team Members who have spent years dedicated to providing care in our facilities as CNAs.

VHS relies on them to be ambassadors and help train new employees on the floor. We spoke with three longtime CNAs with Virginia Health Services about their experiences.

Carrie has worked as a CNA with VHS for 30 years at The Newport Nursing and Rehabilitation Center. What’s kept her in her role for this long?

“My motivation to care for people, love and take care of them … sometimes we’re the last ones they see,” she says. “The smiles on their face keeps me going.”

She is a Senior Ambassador and trains newcomers to the role.

“You have to be a people person,” Carrie says of becoming a CNA. “You have to care about people and treat them well. At the end of the day, when you leave here, know you’ve done your job well.”

Carrie says the focus on the Residents, even the smallest touch like taking care in how they are dressed and brushing their teeth, can help them have a better day.

“It’s rewarding to make them happy at the end of the day,” she says.

“They know. They know if you miss a step. When I’m off, I come back in and they say, ‘I missed you,’ and that makes me feel good. That means a lot.”

Bonnie King started with James River Nursing and Rehabilitation Center in 1996 (though she had a brief hiatus in 2000).

“Me as a CNA, it’s a calling for me. Every day I step in that door, I know that’s where I’m supposed to be,” she says.

She’s had dreams of attending nursing school and a desire to be an RN.

Bonnie is a Senior Ambassador for VHS and helps train newcomers to the floor.

“You have to come in with an open heart and an open mind, and patience and respect,” she says she tells new hires. “And I think with those things working in this field, that would get you through it. … You have to have respect (for Residents and Team Members) and be willing to help.”

She says Virginia Health Services has been supportive from when she started through now.

“James River, on a personal level and on a professional level, they have always been there for me,” she says. “Once you show yourself as a worker, that means a lot to the company.”

Years of experience at Walter Reed

Karen Hudgins has been a CNA at Walter Reed Nursing and Rehabilitation Center since October 1979.

“I like my work,” she says. “I love the stories (the Residents) tell.”

In her years at Walter Reed, she has cared for three individuals who survived concentration camps during the Holocaust. She’s learned about patents created by individuals in her care, and cared for a woman who wrote a book and signed it for Karen about her father’s time running steamboats.

“People forget that those people in the nursing center that did something that made a difference. ‘Cause you have to look at the real picture, you learn things about them that made a big difference in the world,” she says.

She works with another longtime Walter Reed CNA, Marva Hodges. Together, Hudgins says, they helped “break in” now Administrator Bryant Hudgins while he was an aide at Walter Reed.

Marva has been a CNA at Walter Reed for 39 years. “I always tell people, no, I didn’t come with the building,” she says with a laugh.

She is a restorative aide part-time, but a majority of time, she says she’s on the floor because of staffing. She’s an Elite Ambassador, and has been a senior aide on the Ward unit, and was a nursing secretary and unit secretary. As an Elite Ambassador, she had to do the restorative program and trains Care Assistants and new Nurse Aides, and assists with orientation.

“I’m really a people person, not really a desk person,” she says. “I love the patients, I like being in the mix with them.”

Marva says she can go on any unit in the building and “pretty much anyone knows who I am, just by my eyes (because the mask covers so much of her face).”

To keep going in this role so long, all three said the Residents keep them motivated.

“I just love old people, that’s all. You can learn so much from them. … You see their faces when their people come in, they light up,” Karen says.

When a new hire is being orientated, Karen offers these words of advice: “Just remember one thing: They’re real people. And they did make a difference.”

“Realize who you are working with. I remind them that the patient may not be able to give complete information because of their (health conditions). Learn how to talk to them, keep them calm and figure out how to redirect them.”

Carrie says the main things are the Residents and working together as a team.

“If the atmosphere is happy, they’re happy,” she says.

We are looking for CNAs to grow with us. Visit vahs.com/careers to apply for a satisfying career with our team. 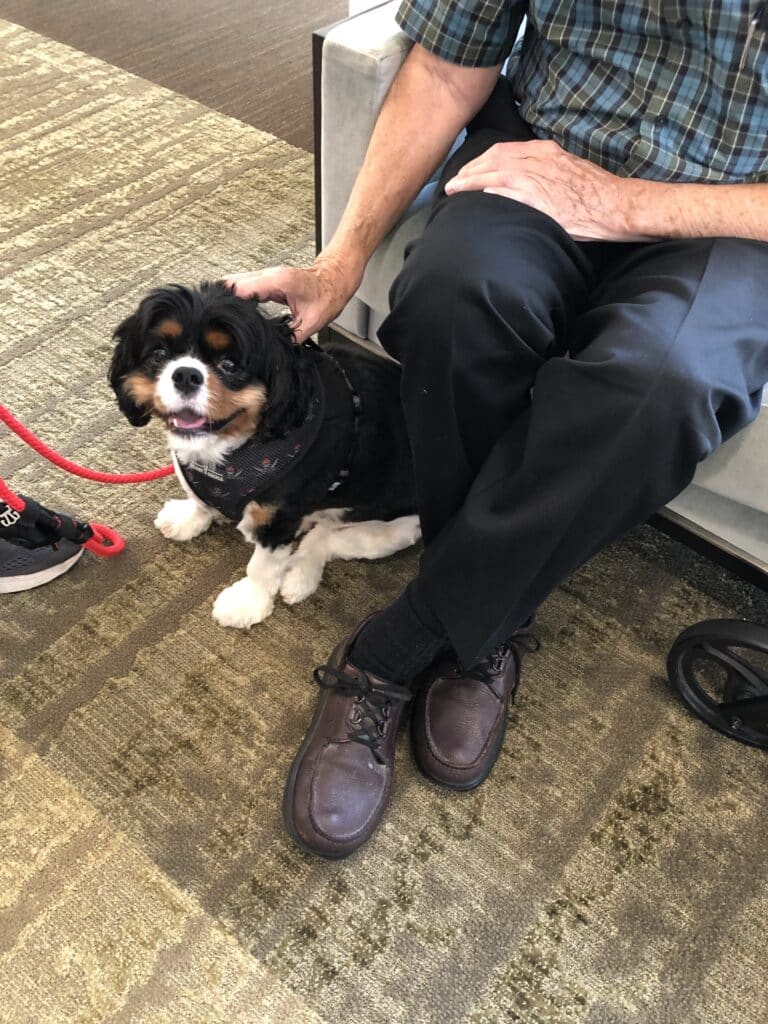 He has a business card with his picture on it. He carries around individual’s stories about their lives, what they’ve witnessed and what they think.